This awesome homage to the South West with what I’d call the aroma of the locale is back, and ready for your shave dens. Available individually, A great Bundle Package (link below) to save some money, Royal Star Jelly !, an EDT, body soap, and bar shampoo, to name a few, Absolutely, take a moment to read about Solstice, and watch the product spotlight video’s from Douglas, and find out for yourself why Phoenix Artisan Accoutrements, and Crown King rule ! Shave on my friends, and stay smooth. 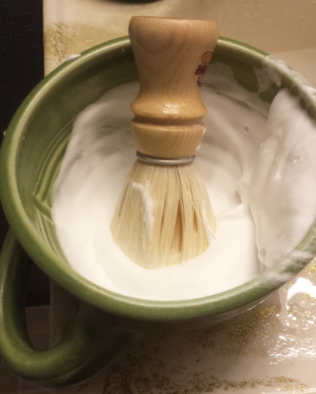 I prefer lathering in a bowl.  I think I initially started with a bowl because I didn’t know you could lather on your face.  And, using Taylor of Old Bond Street (TOBS for short) cream which I started out with was very easy to use in a bowl.  In fact, if you are in a hurry, using a cream like TOBS is a very fast way to get a good lather going quickly.

But there are other reasons which lead me to recommend using a bowl over lathering on the face.  Ultimately I believe lathering in a bowl gives you better control over forming the best and most optimum lather.  It is easier to control the amount of water that you add and it is visually more accurate.  You can see right there in the bowl how good the lather is.  You don’t have any feel for it on your skin but you can feel how the brush moves and in that way also determine how thick or thin the lather is.  As well as just lifting the brush up and out of the lather to see how it peaks.

Once the lather is formed, you don’t have to spend much time painting it on your face, it’s already formed so just spread it around and get on with the shave.  I also like to use my brush like a painter uses a brush with a paint can and scrape lather off the brush on the side of the bowl.  This also allows me to control where the lather is on the brush which in turn allows me to optimize the lather on my face.

Ok, now that I have convinced you to use a bowl (probably not), you have to decide upon a bowl to use.  At first, if you don’t want to spend any money, just find a cup or small bowl from your kitchen and use it.  If this works for you and you are happy, that’s good.  If you want a mug that has been specifically designed for lathering there are lots of good choices.  I see many people using the Captain’s Choice mugs which seem to fit nicely in the palm of your hand.  I like the Doug Smith Pottery bowl in the photo above because it adds to this idea a thumb hold.  So you can have the bowl in the palm of your hand and an added bit of security to prevent dropping it.

The Wet Shaving Podcast (a great resource by the way) did a discussion of bowl vs face lathering in a recent episode and Joe suggested that it is inconvenient to take a nice bowl when you are traveling.  This is true but it’s easy to take an inexpensive metal bowl which will work fine.

Be sure to check out our weekly contests, and Vendors of the month.

Ladies and Gents I am to say the least honored and very excited to have with us this month one of the best brands in the WORLD with us for the month of May ! This is a Creighton's manufactured brand which should explain a lot about my excitement to have both Todd Fisher and Brittney McDermott of St. James of London (SJOL) with us ! in their own words. St James of London was originally created by the world-renowned Creighton's in 1953. Long before it was more mainstream, all our shaving & cologne products were and still are 100% Natural, Alcohol-free, Paraben-free, Sulfate-free and produced in the England. Accompanying our shaving & cologne products are razors, brushes and stands of varying price-points. We’re proud of our heritage and reputation for creating world-class products that exceed expectations and provide excellent value. As a group lets welcome in some great people, an amazing brand, and what will be one of the best months here on the Wet Shaver Review ! P.S.- Each week I will announce this, but they above ad beyond the weekly raffles, a Q&A session are also offering 15% off all direct sales from their website www.stjamesoflondon.com **** USE COUPON CODE WSR" On that note let the fun begin smile emoticon

For your viewing pleasure !