As anticipated, this soap has been waiting to be reviewed for a long time. Oh, I wish I had tried it earlier! Once the plastic film containing the soap was removed, the scent came to life, strong and manly (I left the soap to dry after my shaves and it acted as a home fragrance).

The artisan describes it as: “The Tobacco Lounge was a true creation of inspiration. Love having a nice cigar from a Spanish cedar lined humidor while relaxing in a old leather club chair? Then this soap is for you! we have created a custom blend to give you a fresh and sweet musk to create those sweet highs and smoky low notes with the feeling of being in a classic cigar lounge. Does not get more manly than that!”

The cigar and tobacco notes are there, a soft and sweet musk note is there, too. Regarding the last sentence, well, we might object that there are other soaps in the market (I think of Midnight Stag by CFG, for instance) that are definitely manlier than this.

For those who like to make comparisons, this soap reminded me of a great soap, Cognac and Cuban Cigars by Henri & Victoria. The overall scent is quite similar.

How did this soap performed, scent apart? I tried it with both my 5/8 Jaguar (my straight razor of choice) and my Muhle R89. With the Muhle I used two blades, a terrible one (a Personna, clearly a defective one, since they are usually very good) and a favorite of mine, an Astra Green. With soaps which come with no container (a slight con, here) I usually either put them in a bowl or in my left hand and perform the lathering directly on the soap surface.

In every shave the soap provided a great protection to the skin, ensuring the right amount of glide and a great post-shave. Even with the terrible blade, the soap helped me to avoid nicks and cuts. 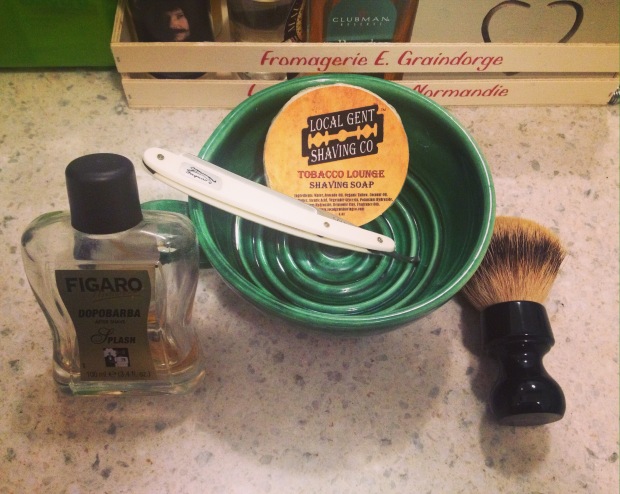 My suggestions for an AS to pair with this soap are the following:

Overall, I must admit that I had no high expectations about this soap, but I was proved wrong. It performed very good and outperformed some other soaps I bought during my honeymoon (I won’t mention them), soaps of more praised brands. I think Local Gent Shaving Co. deserves more recognition, since it’s not a brand I’ve seen often in the various FB groups.

Be sure to check out our weekly contests, and Vendors of the month.

Ladies and Gents I am to say the least honored and very excited to have with us this month one of the best brands in the WORLD with us for the month of May ! This is a Creighton's manufactured brand which should explain a lot about my excitement to have both Todd Fisher and Brittney McDermott of St. James of London (SJOL) with us ! in their own words. St James of London was originally created by the world-renowned Creighton's in 1953. Long before it was more mainstream, all our shaving & cologne products were and still are 100% Natural, Alcohol-free, Paraben-free, Sulfate-free and produced in the England. Accompanying our shaving & cologne products are razors, brushes and stands of varying price-points. We’re proud of our heritage and reputation for creating world-class products that exceed expectations and provide excellent value. As a group lets welcome in some great people, an amazing brand, and what will be one of the best months here on the Wet Shaver Review ! P.S.- Each week I will announce this, but they above ad beyond the weekly raffles, a Q&A session are also offering 15% off all direct sales from their website www.stjamesoflondon.com **** USE COUPON CODE WSR" On that note let the fun begin smile emoticon

For your viewing pleasure !